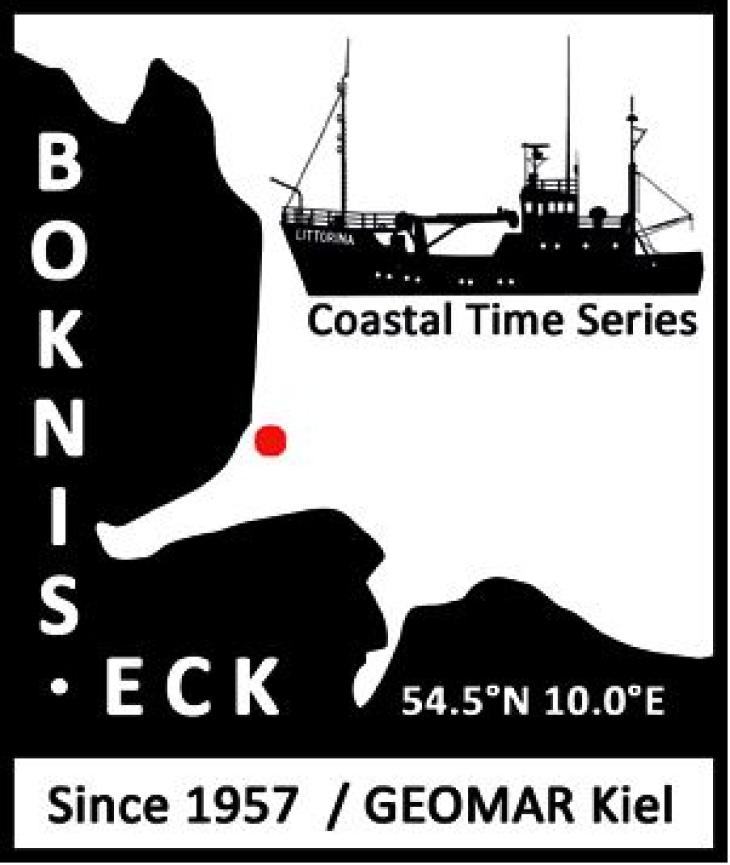 ... is located at the north-eastern entrance of the Eckernförde Bay in the SW Baltic Sea. Boknis Eck belongs to the oldest -still operated- oceanic time-series stations worldwide: First regular hydrographic measurements (salinity) have been made on a daily basis in the Eckernförde Bay from 1876 to 1893. ‘Modern’ biological, chemical and physical measurements at Boknis Eck are conducted since 30 April 1957 on a monthly basis. The water depth at Boknis Eck is 28 m. Standards sampling depths are 1, 5, 10, 15, 20 und 25m. Salinity, temperature, phosphate and oxygen (O2) data have been recorded since 1957. Chlorophyll a measurements started in 1960. Additional nutrients (nitrate, nitrite, ammonium and silicate) and Secchi depths are available since 1979 and 1986, respectively.

Since riverine and groundwater inputs are negligible, the overall hydrographic setting at Boknis Eck is dominated by the regular inflow of North Sea water through the Kattegat and the Great Belt. Seasonal stratification occurs usually from mid-March until mid-September and causes pronounced hypoxia (O2 < 10 µmol L-1) which sporadically become anoxic. To this end, the location of Boknis Eck is ideal to study (i) a coastal ecosystem under the influence of pronounced changes of salinity and (ii) biogeochemical processes sensitive to changes of dissolved oxygen.

A cabled underwater observatory for high resolution online measurements (incl. temperature, salinity, ADCP, O2, CO2, and CH4) has been installed in December 2016 at 14.5 m water depth in close vicinity to the monthly time-series site. The complimentary online measurements will help to improve our ability to capture short-term events such as upwelling etc. at Boknis Eck.